Home » Season » Fall Recipes » Roasted beet and plum salad, or making the most out of what you've got {V}

You've just spent hours browsing Pinterest, and you've finally bookmarked a great salad to make for dinner. It's Saturday, the one day a week you really have to put together something you can feel good about. The rest of the week is harried, you're running from work to the gym, grabbing cold pizza for lunch, and by the time dinner comes, you're bloated, and lucky if anyone but the cat shows up at the table. But at least tonight, you can put together a beautiful, vibrant salad with all the fixings. So you run to the store and get all the missing ingredients for your upcoming work of art.

But then evening comes, and your kid spills paint on the couch. Or there's something really good to watch on television (Dane Academy on Netflix, in my case). And Saturday comes to an end, and dinner was once again a stir fry. The beautiful vegetables you bought are languishing in the fridge, while fruit flies are attacking the tomatoes on the shelf.

Sunday dinner is already planned, and Monday is leftovers, so you don't get to that salad before Tuesday. But then, you spend 15 minutes putting it together, and it looks good, though the greens are a little wilted and the tomato had some brown spots. At the table, no one says anything, but your significant other doesn't ask for a second helping. One bite into that tomato, and you understand - it's old. Everything on your plate has seen better days, including the dressing. You just feel so defeated by it all, you make toast for dessert.

That scenario used to occur in my house at the regularity of once a week. On the weekend, I would go to the store with big plans and ideas, spend money on great, vibrant produce, and then not get around to using it on time. The problem is, as we all know, veggies don't like to sit off the vine for long (neither does meat, but with even more dire consequences). The other problem is that in our busy lives, we just don't have the time to process ingredients the moment we get them. Something's gotta give, and in my case, that's usually the produce. 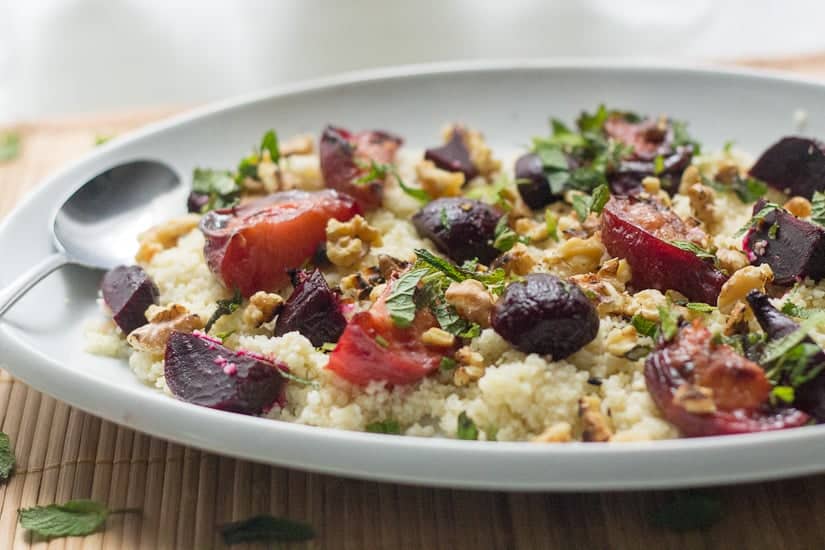 So I've found ways to perk up soon-to-be-expired salads. Sometimes, all it takes is a bit of directly applied heat. Roasting works wonders on hardy vegetables that look bad when wilted, like cauliflower, broccoli, eggplant, and even tomatoes. It concentrates flavours, adds colour, and allows you to cut off unsightly blemishes. Other times, when the veggies still don't look good even after roasting, I puree them and add them to soup. This works great for potatoes, corn, peppers, and pretty much any other option. Herbs also get chopped finely and thrown into soups. The only things I didn't try roasting are cucumbers and lettuce, due to the high water content, though apparently grilling lettuce is also thing. Even radishes taste great grilled, though I prefer to saute them with a good amount of vegan margarine.

Today's roasted beet and plum salad came out of exactly such an attempt to preserve vegetables that were soon to expire. A huge bag of beets sat on the bottom shelf of my cupboard, slowly starting to sprout. Local plums were nearing their best-by date, judging by their increasing softness. A quick roll in tin foil and a douse of olive oil, salt, and pepper, some time in a hot oven, and these babies were as good as new. Except better - roasting emphasized the beets' natural sweetness, while the plums took on a languid, syrupy quality, that immediately inspired the idea of a sauce. Leftover bulgur in the fridge made a quick bed, and some toasted walnuts brought in a much-needed boost of good fats and protein. I used all the plums, but froze the rest of the roasted beets for smoothies or future salads. Less than 10 minutes of assembly later, a beautiful, vibrant salad that is also a complete meal came together for dinner.

So next time you find yourself stuck with wilting vegetables, especially in winter time, just give them a quick roasting in the oven. Few veggies require as long to roast as beets, so with a quick drizzle of olive oil and lemon, most would produce a dinner in under 30 minutes. And I promise you, no one will complain about the lack of flavour.

A vibrant salad that is also a complete meal with proteins, good fat, and tons of flavour. This amount of salad will feed two people, so double amounts for more.
5 from 1 vote
Print Pin
Course: Salad
Cuisine: Other
Servings: 2
Author: Ksenia Prints

« Creamy eggplant tomato stacks, or how to make your Saturdays a bit more decadent
Chunky tomato sauce for canning, or what you can do now to save time later {V, GF, Paleo} »