When I think of where I was a year ago, my heart breaks just a little bit.

I don't mean where I was physically, hunched over a blistering-hot tray of roasted lemon potatoes, broccoli and bell peppers, golden from a sprinkling of turmeric and fragrant with my last remaining dry summer herbs. I mean my emotional state; ecstatic one moment, then plunged into despair the next, yet constantly riddled with anxiety.

What I thought was love was actually infatuation. What I saw as joy was actually bouts of manic euphoria. What I confused for happiness was no more than the frantic gasps of breath of someone who has been deprived of oxygen for so long, they could no longer tell what was pure H2O - and what was smog.

In November of last year, the winding paths of the electronic dating sphere brought me A. As I am wont to do in autumn, I fell in love quickly, dazzled by his charm and other-worldliness, his promises, his knowledge of things I had heretofore only heard of on Mr. Robot. Or at least, I thought I fell in love.

In the throes of this-thing-called-love, I barely slept. I spent days glued to my phone, waiting for the next satisfying 'ping' of a message. His 'good morning' and 'good night' became my drug, his caresses my needle. Like a junkie, I used his words and promises as the receptacles for getting diacetylmorphine into my body, creating intense euphoria while suppressing all sense of physical pain. I saw our connection as a cosmic gift, building castles in the sky from the breadcrumbs he spread around.

But, like all heroin rushes, the euphoria faded. The cracks appeared in everything, and I started glimpsing that behind the words, there was not much substance. Furthermore, there was little that was real in my feelings - instead, I wanted so desperately to be crazy in love, that I actually made myself crazy.

But amidst all the craziness, I started cooking again. At first it was salads and lunches for one, stuffed baked potatoes and soups. Then it was more elaborate lemony desserts that I have yet to show you, the sprinkling of powdered sugar dust seeming like the haze I was walking through. And then, it was this tray of roasted lemon potatoes, broccoli and bell peppers, coming out of the oven smelling like the citrus orchards of my youth.

Throughout the endorphin-fuelled daze and daydreams, I got my kitchen groove back.

A and I split three months later, on the heels of my life-changing trip to Hawaii. I found my future condo barely three weeks later. I baked brie and fried blintzes. I went to Barcelona and Israel. I organized events. I moved and did renovations. I finally started feeling at home (I baked cinnamon buns to celebrate).

And then, I met real love.

So when I think back to where I was a year ago, my heart breaks just a little bit. Not because it was such a bad place to be, or because there was so much confusion, or even because I let myself get so, so delusional. Or at least, not only because of that. My heart breaks just a little bit because back then, in the cloud of steam produced by my freshly roasted lemon potatoes, broccoli and bell peppers, I let myself think, "This must be IT."

I just couldn't see what was coming. 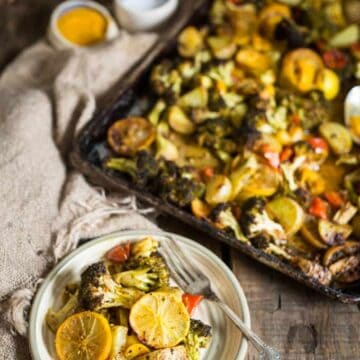