Behold, the perfect way to start your day: crispy breakfast potato latkes topped with egg, kale, tomatoes and Tamari almonds. Whether you're serving this to house guests around Hanukkah, Thanksgiving, or just enjoying it on a lazy Sunday morning, this is an indulgent dish that actually comes together in under 30 minutes, and is a tad more virtuous than it seems (kale makes everything healthy, no?) 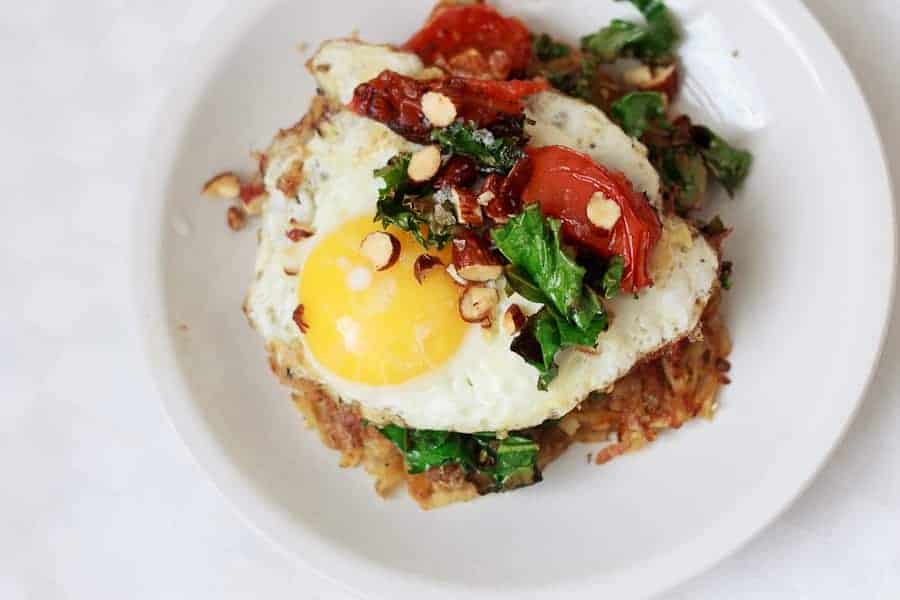 The inspiration for this dish came from a restaurant located in Montreal's Plateau neighbourhood, L'Gros Luxe. Known for delectable cheap dishes and great cocktails, on Sunday brunch this place becomes a hangout for girlfriends sharing mimosas and pushing strollers, alongside burly, flannel-clad bearded men grumbling into their Caesar's and amber beers. In short, it's a typical Montreal scene in which I usually feel horribly underdressed and yet strangely hip at the same time - so, exactly the sort of place where you'd expect to find breakfast potato latkes.

So when one Sunday, G and I uncharacteristically found ourselves OUT OF THE HOUSE and looking for a place to eat, one dish on the L'Gros Luxe immediately caught my attention. It combined eggs, kale, tomatoes and almonds, and I was intrigued. Though they weren't called breakfast potato latkes, that's exactly what they were! But I wasn't into the Asian-style marinade the dish came with, and so, I decided to experiment with a way to make this plate more Jew-y.

Because that's just how I roll.

And so, a side of potatoes turned into crispy vegan breakfast potato latkes topped with egg that is great in its own right (and I imagine would work really, really well when made with sweet potatoes, or a mix of spuds). The egg was cooked sunny- side-up for G, scrambled for me, and the sauce was reduced to a drizzle of Sriracha - I felt like any more flavours would have actually detracted from the dish.

But the cherry on top of this creation, and the thing that actually enabled me to take these breakfast potato latkes to the next level, were NaturSource's [amazon text=Tamari Almonds&asin=B00MOI3FUI]. These smoky, salty nuts are a treat in their own right, and I've been gobbling on them for days, a handful at a time (too much tamari at once can be overwhelming). I'd like to serve them alongside smoked mozzarella, and they go beautifully with sweet potatoes (recipe coming up!). All in all, this is one snack I find myself going back to over and over.

So give these breakfast potato latkes topped with egg, kale, tomatoes and Tamari almonds a try this weekend. If you do, post it on Instagram, Facebook, or Twitter, and tag me (@immigrantstable) in it - I'd love to see your creations. 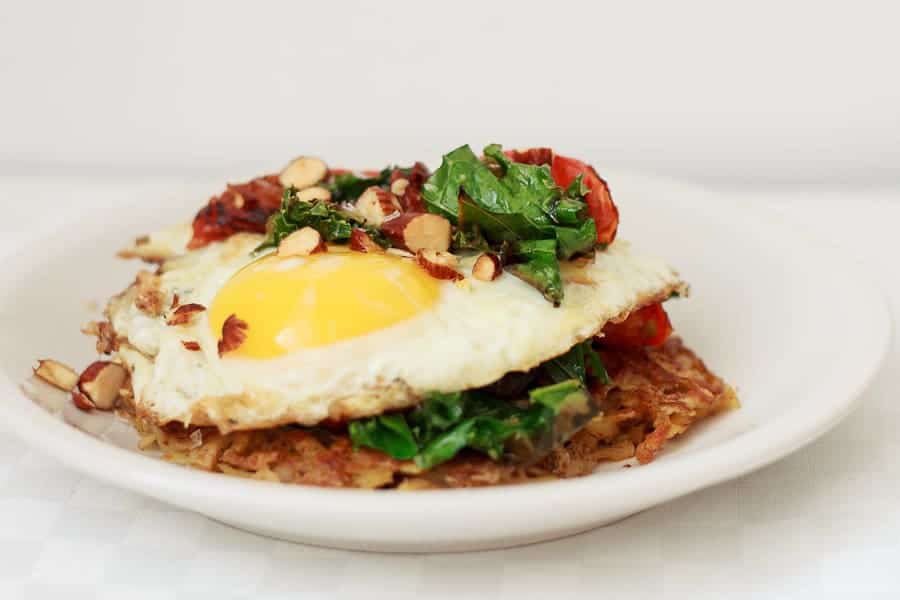 And now, onto the Friday links!

Have a great weekend, and make breakfast potato latkes topped with egg, not war.

Disclaimer: This is a sponsored post, but all opinions expressed here are my own. I am proud to support a local, family-owned business whose product I truly appreciate, and I thank you for supporting my sponsors.

Behold, the perfect breakfast potato latke topped with egg, kale, tomatoes and Tamari almonds. Serve this for a Hanukkah brunch or a regular weekend. The latke can be made out of potatoes, sweet potatoes, or a mix of spuds.
No ratings yet
Print Pin Rate
Course: Breakfast
Servings: 2
Author: Ksenia Prints

« Quick-pickled fall vegetables, or how to punch up any salad {V, GF, Paleo}
Holiday cookies and a sneak preview of Wednesday's post »