Dear reader, besides talking about the über-cool Montreal Restaurant Day, today I am going to do something I have never done before, and that is to be completely, truly honest with you. Despite sharing tales of my father's temper, my fraught relationship with my sister, my fights with my grandmother, I feel like I haven't actually revealed my true self out here on this blog. I haven't yet shared my deepest, darkest secret: dear reader, I have been reading Fifty Shades of Grey.

It all started fairly innocently. About a year ago, a co-worker has mentioned to me that the Fifty Shades of Grey trilogy has been rumoured to be responsible for improving relationships. Apparently, anecdotal evidence suggested that men really liked it when their girlfriends read 50 shades, because they are then more open to experimentation. As I feel about most discussions of sociological shifts in relationships, this got me intrigued. But I didn't take it any further; the thought of being seen with a Fifty Shades of Grey book mortified me.

Then last week, my work took a bunch of people out to a special screening of the Fifty Shades of Grey movie. I knew this would likely be my only chance to actually go see the film, and so I jumped on the opportunity, my curiosity piqued. And it was just as bad as I feared it would be; actually, probably even worse. Between the terrible over-acting, the romantic cliches, the bad script and the overly vanilla depictions of DBSM, I pretty much laughed for an hour and a half.

These memes had me laughing for days

But then people kept telling me the books were better. Surely, over 100 million people across the world can't be complete idiots, right? So the next morning, I just couldn't stand it anymore. I found the book on a free online site, and began reading it on my phone.

I have been hooked on the Fifty Shades of Grey trilogy ever since. I read every chance I get - on the walk to work, on the metro, while drinking my breakfast smoothie, during my lunch. I am aware that what I am reading is bad prose with some terrible implications; I am annoyed with its pop-culture grasp of mental illness, I have serious issues with its (initial) use of sex, power and BDSM relationships as a threat to keep the main heroine in line, and I can't stand the constant quotes from "The Inner Goddess". If I read the word "delicious" one more time, I'll burst. I laughed out loud for 15 minutes after reading Christine Grey's BIG SECRET, which will heretofore be known as The Least Surprising Twist in a Novel, Ever. And yet, I just can't stop reading. 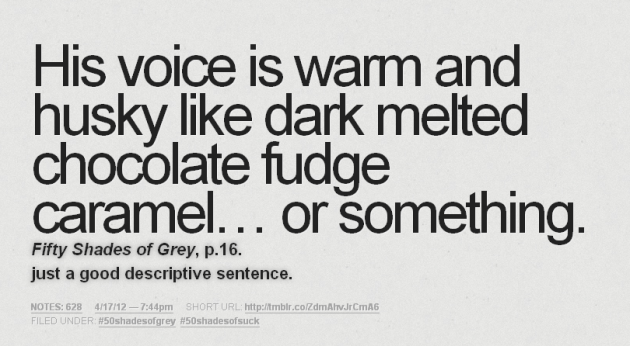 In its defence, I feel like the book has been vilified. It's OK to explore your sexuality in a loving, trusting relationship. Heck, it's even OK to do so in a safe, non-committed environment. It's OK to tell girls that being aroused at the feeling of pain is theoretically not a sin. It's OK to read erotica for women. But what I think is Not OK is to: 1) feel like you need to do certain things that go against your nature to satisfy your partner; 2) feel genuinely scared at the thought of someone 'punishing' you past the age of eight; 3) accept someone's orders to take birth control; 4) romanticize needy, frankly questionable declarations of love at times of fear; and 5) excuse very controlling behaviours with folksy psychology. I could go on, but I don't want to reveal too much to anyone who may still want to read the books (do so at your own risk), or watching the movies (don't).

Anyway, chances are that if you'll see me on a Montreal street in the next week, I'll still be clutching my phone. My face will be read and I'll be trying to hide the screen from any passersby. If you call out to me, I'll probably yelp and flinch in surprise. But the truth is that I feel much better having come clean about this. I guess I'm letting the book rub off on me in some ways, no?

Did you read Fifty Shades of Grey? Watched the movie? Do you, too, feel like you now need a support group just to come to terms with it? 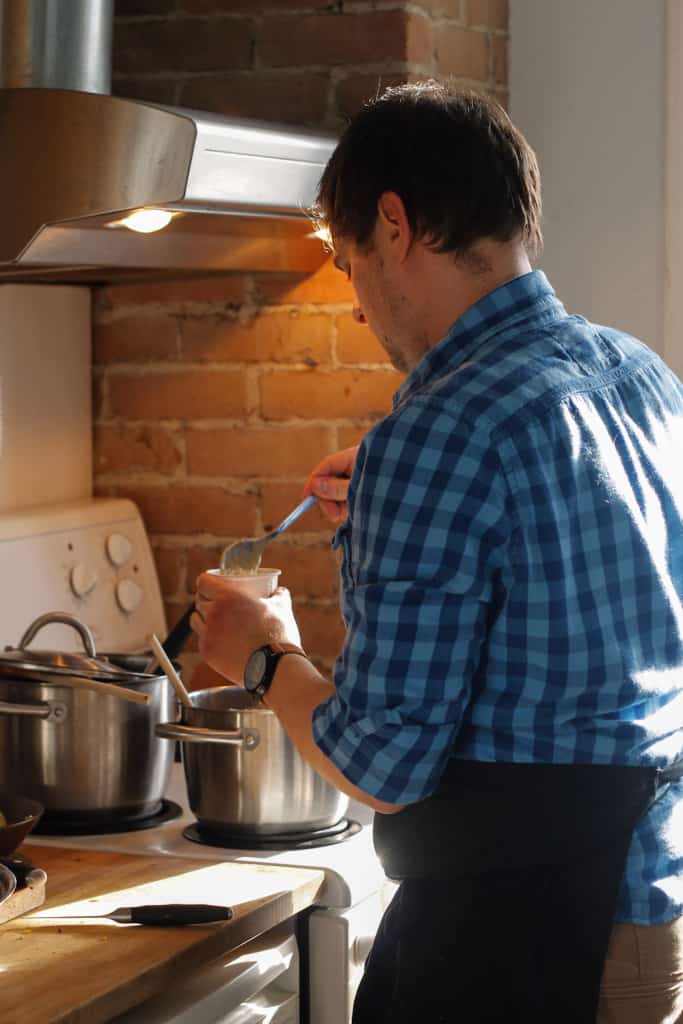 A social experiment that enables anyone to turn their kitchen, front stoop, or neighbourhood park into a restaurant for a maximum of 24 hours every three months, Restaurant Day seems to have captured the palettes of adventurous diners and curious urbanites in 68 countries across the world. It is kind of a big deal in Montreal, which is a mecca of food culture for the other 361 days anyway... But on those four days throughout the year, this foodie playground truly becomes an egalitarian paradise.

This was my first time taking part in Restaurant Day. Accompanied by two food-obsessed friends, one of them a talented Israeli writer and photographer, I set out to explore restaurants-for-a-day in my area. Pretty much anywhere accessible by foot was a go, from 3pm until our bellies were full to bursting. And then I went out again at night with G.

Some of the food I tasted on Restaurant Day was exceptional. A deeply spiced creamy cauliflower soup with coconut cream and toasted coconut flakes stands out like a revelation. Another tomato, feta and apple soup garnished with avocado and shallots will surely make an appearance in my own kitchen. An open-faced tartine with aged goat cheese and fig jam was so good, I could have eaten twenty. A misnamed chocolate-nut fudge square tasted just like the best Ferrero Rocher, but not at all like its sickly sweet namesake.

Then, as expected, some dishes were flops. Restaurant Day's free-for-all structure means that even people who had no business being in the kitchen tried their hands at baking. Some offerings were just not very successful, even when produced by very skilled hands (we all have our flopping cakes and rubbery omelettes). A coconut financier in a cute shop was a little dry and overly browned, nothing to write home about. An experimental Bloody Mary cocktail tasted like the hybrid child of a grapefruit and a tomato, in the worst way possible. A parsnip soup with pear was lackluster at best. An Italian polenta served in the most beautiful setting imaginable was actually a dry, rubbery brick that tasted suspiciously of canned mushrooms.

But over all, Restaurant Day was truly fascinating, a cheap carnival for all the senses. My voyeurism was satisfied by looking around my neighbours' houses, my hunger was satiated ten times over, and I got to spend an entire afternoon exploring at a very affordable budget. 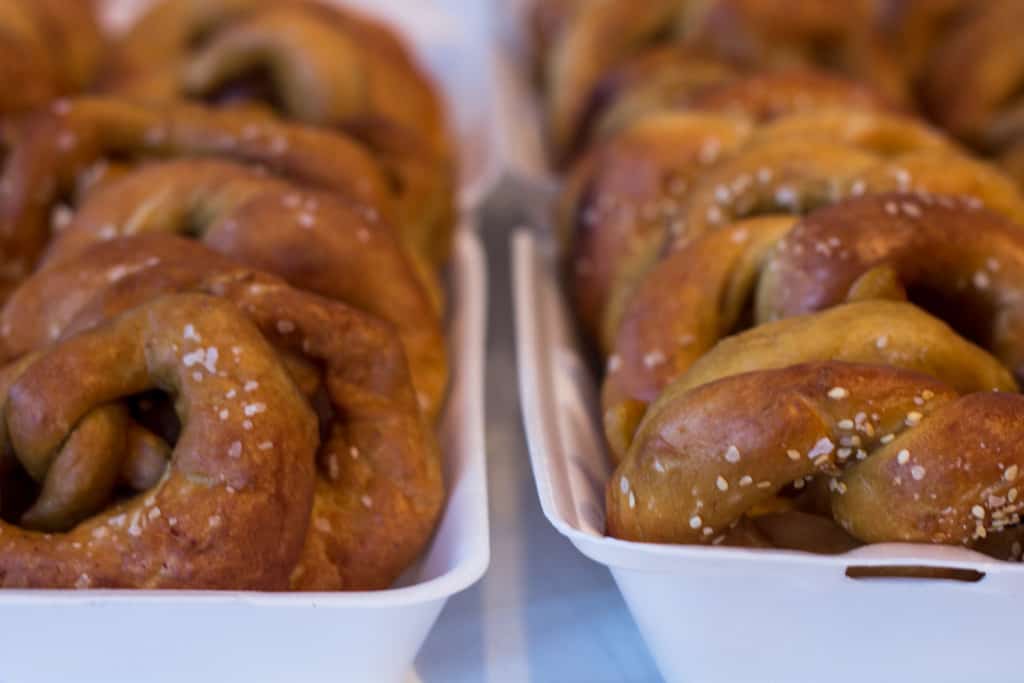 Does your city take part in Restaurant Day? Have you ever gone out to explore, or offered your own cooking? I know I'm already planning my own Restaurant Day offering! After all, the only cost is ingredients and the risk of humiliation - and now that I've revealed my obsession with Fifty Shades of Grey, I think I'm well past embarrassment.

« 30-minute squash and greens curry, or what my weeknight cooking looks like
The natural cold remedies roundup, or how to beat that cold with food »