Within the first two months of us dating, my boyfriend invited me to Thanksgiving dinner with his family. Perhaps it was because he really liked me; perhaps it was because I was leaving the country soon. Whatever the case was, I was excited, but also a bit nervous, at the invitation. I had never met his family at that point, but I knew they were well educated, well read, and likely quite cultured, and I really wanted to impress them. So I decided to bake a pie.

The problem was, at that point I was at the height of my lactose intolerance. I had also begun having unexplainable stomach pains, that I would (much) later link to yeast, or Candida overgrowth. I also had very little successful experience at baking. But what's all that compared to the prospect of impressing someone's parents? I figured I'd bite the bullet and bake something as iconic as pumpkin pie. But I didn't even know where to start.

My two experiences baking pie until that point were successful, but involve their own stories. They were both berry pies. This was a wholly new undertaking, and I decided to consult friends on the intricacies of pie baking. I was delighted to find out my friend Sandy Klowak bakes pumpkin pies for her family every year, and she was kind enough to invite me over for an afternoon of baking. She would even open her secret family recipe to me! Things couldn't have lined up better.

Except that I really wasn't a good baker (I still barely am OK; half my attempts turn out, while the other half fails miserably), and I didn't know the first thing about egg washes, burning pie crusts, or the difference between shortening and margarine (I know, I know, blasphemy). Sandy was a lifesaver; throughout that afternoon, she patiently walked me through the process, teaching me to not overwork the dough, to use real cream in place of condensed milk, and to cover the edges of the pie crust with tin foil in order to avoid burning (a trick I sadly failed to implement when making this pie). She shared with me tried and true crust and filling recipes from her mother, Jill Moats, which were actually adapted from old versions printed on Crisco packages and in the original Joy of Cooking book. And above all, she showed me how easy it is to bond over eggs, cream and flour. There was something unabashedly traditional and feminized about that pursuit, the act of mixing together sweet ingredients with fragrant spices, of checking the oven, of drinking warm tea and room-temperature wine and talking about our lives. I wasn't discovering the wheel; I was simply rediscovering what my ancestors have been doing for generations. And isn't that the whole point of cooking family recipes?

Since then, we have baked pies together for three consecutive Thanksgivings. The recipes stayed the same, though the setting has changed - last time we made these, Sandy has already moved in with her boyfriend and used homegrown pumpkin for the filling. We have also made Christmas favours, rolled fresh pasta, and cooked tomato sauce together. We have discussed ravioli and perogies, making tentative plans for more big baking projects. And I have made the pies myself, making this with different squashes, playing around with pumpkin pecan pies and turning the filling into a moist and delicious crustless tartlette (recipe to come). Throughout it all, our friendship grew stronger, bound by the power of gluten, heat, and sugar. And though I am pretty certain I have impressed my boyfriend's parents with my pie-making skills, the best part to come out of these pies was our friendship. 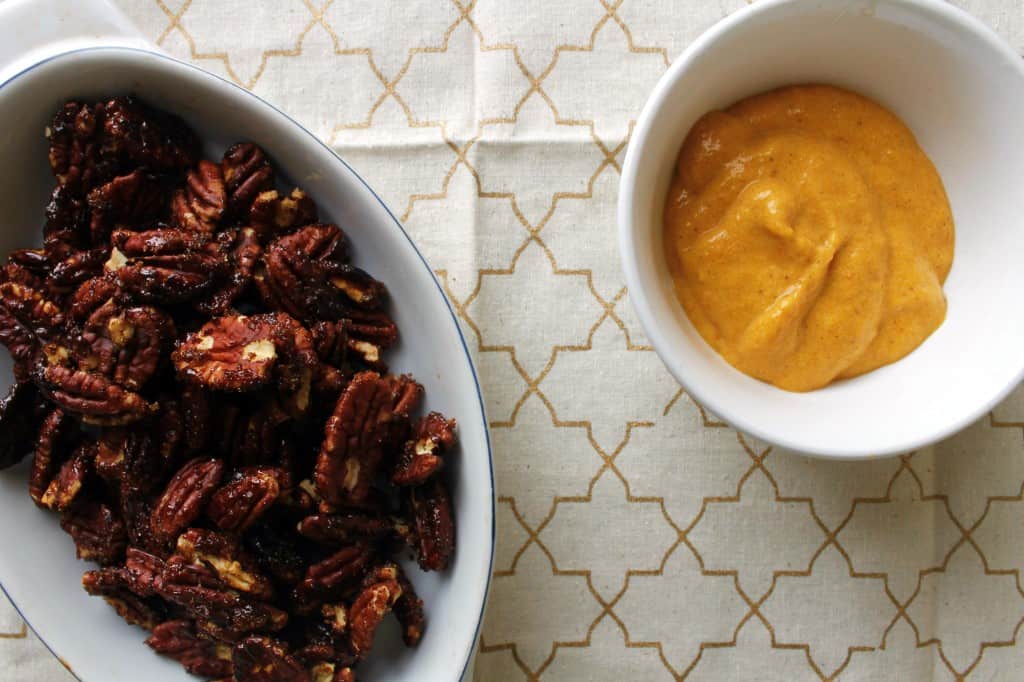 This old-fashioned crust recipe produces a flaky, golden, beautiful pie. The filling is rich, deeply spiced, and not too sweet. I added caramelized pecans on top for a special touch, and their crunch and sugary coating truly take it to another level. The crust can easily be made ahead and kept in the fridge in plastic wrap, or even rolled out and frozen inside a pie shell until you're ready to use. Filling and pecan topping can also be made a day ahead.
No ratings yet
Print Pin Rate
Course: Dessert
Cuisine: American
Author: Ksenia Prints

« Paprika chicken, or the things we do for love
Sabich, or how an eggplant, potato and pickles all learn to get along {V} »