The secret to this vegan quiche is the perfect sweet potato crust, and the cheesy, earthy tofu filling with juicy cherry tomatoes and roasted peppers.

The moment that the door closed sent a ripple of joy through my body. Feelings of relief, excitement and freedom all began to course through my mind, telling my feet to move faster, my hands to fidget harder. This was finally it: the long-awaited moment that my parents went on vacation and left me home alone. And like every self-respecting teenager, I immediately proceeded to go and do one thing: make quiche (though it was not vegan quiche at the time).

That day, I prepared an entire feast centered on quiches. Eggplant and tomato pie with feta; spanakopita; a simple mushroom and corn quiche. Accompanied by light salads and molten laval chocolate cakes for dessert, this was the Shavuot feast that I have been dreaming of that whole year. I invited all my friends, my boyfriend stayed over, and though of course wine was had, the overall sense of debauchery was certainly not what you would expect from a teeanger left to their own devices for a weekend.

But how could you act rotten when there's quiche on the table?

Quiche is a mainstay of Israeli cuisine. Though what Israelis refer to as quiche, or "pashtida", is far from the classic French standard; though the eggs, cheese and cream are usually there, their ratio varies dramatically, the presence of a crust is hardly mandatory, and the overall results can be as different from one another as organic heirloom tomatoes. There are dozens of options, and the final recipe is usually dependant on the home cook's fridge and cupboard supplies more than some sacred ratio or the coolness of the dough. Israeli quiche is diverse, quick and easy - and it's simply a different ballgame than its North American and European cousins.

All that being said, this vegan quiche with roasted peppers and tomatoes is a compromise between what most of my readers will know as quiche and what I've come to expect from Israeli pasthida. I made it twice last month, for the two different seders I went to, each time with a different filling (the second filling I made was leek and mushrooms, which is my favourite quiche and kugel filling). And they were both delicious.

The secret of this vegan quiche is the perfect sweet potato crust, and the tangy, earthy filling that incorporates the flavours of hummus and nutritional yeast. The roasted tomatoes are bursting with juice, while the luscious roasted peppers lend the whole thing a silky feel. The end result is a dish that is surprisingly simple to make, but incredibly delicious to eat.

To those who are leery of vegan quiche - have no fear. If the stretch between this colourful vegan quiche and your traditional idea of the egg, cheese and cream-laden French concoction you've come to think of as quiche is just too great, throw aside the labels.

Just think of it as an Israeli pashtida, and you'll be fine. 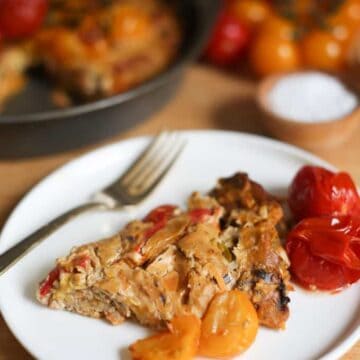