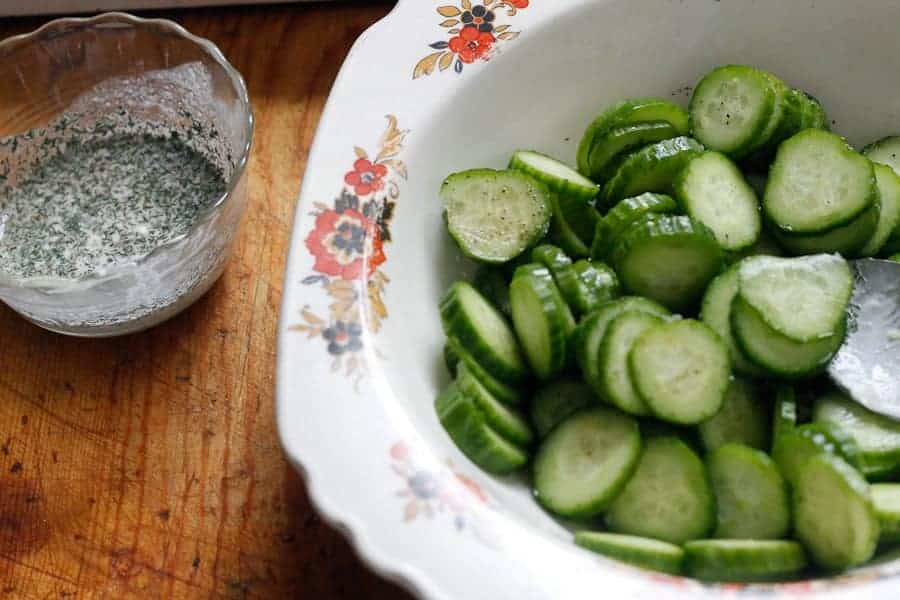 G's father does not cook from the latest issue of Bon Appetit, nor from Deb Perelman's Smitten Kitchen. Though he appreciate the photos, I suspect he doesn't like Ottolenghi's. Hell, he probably wouldn't even give Anya Von Bremzen's book a try. Yet the dishes he produces are often as steeped with tradition and the stories of his family's own migrant kitchen as anything I have ever cooked on this blog. And for that, I would like to share with you his Ukrainian cucumber salad.

When G's father cooks, it is entirely from memory. He chops methodically, pausing every once in a while to pursue a thought, to look for a missing ingredient, to stare into space. He does not skimp on the fat and salt, though his doctors and wife keep telling him to do so; but for me, he always omits the sour cream. And for that, I love eating his food. 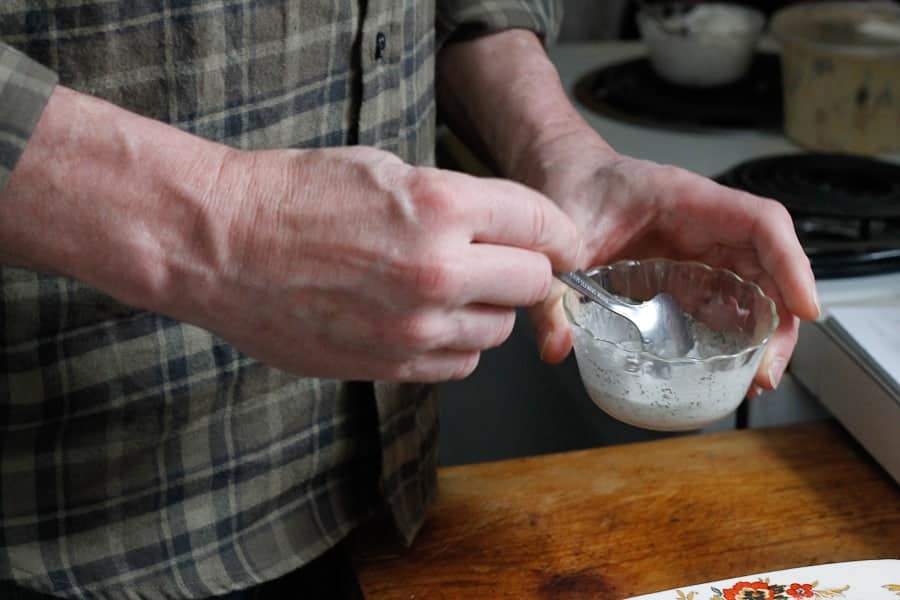 G's father goes for the tried and true. He has a constant repertoire of things that he cooks on a weekly rotation: borscht, potatoes with dill, this Ukrainian cucumber salad. Then he has those dishes that he pulls out only for special occasions, like the Christmas-time kutia, with its pearls of wheat covered in a sweet sauce of honey, walnuts and poppy seeds. And for that, I love spending Christmas dinner in their house, though I am still Jewish.

And when I say that G's father cooks from memory, I mean it in more ways than one. Each dish he produces is a conjuring of his mother's Ukrainian kitchen in the Saskatchewan prairies, with its stores of freshly churned butter, dill pickles and homegrown potatoes. Each dish he puts together is an homage to his family, its roots, its journey from Ukraine to Canada, its steadfast desire - and success - in establishing an honest, working farm in this cold, desolate land. Each dish G's father makes embodies everything I strive for in this blog: cooking that is from the heart, and from the family recipe book. And for that, I love to watch him cook, even if I want to lighten up everything he makes.

Well, everything but this Ukrainian cucumber salad. Though I absolutely love to watch him make it, I can't say I want to lighten it up. With its thinly chopped spheres of cucumber and onions slicked in a tangy, creamy dressing of vegan mayonnaise, vinegar, and a generous handful of dill, this salad is already pretty much as light as it gets. It transmits the fresh taste of cucumbers while also letting the acidity of the onions shine through. The result is a beautiful, versatile salad that I could eat for days during hot summers and freezing winters alike. It's a constant friend at the dinner table that you can recognize by smell alone.

But the reason I love this Ukrainian cucumber salad the most is that, despite his staunch adherence to tradition, G's father makes one small concession when making it. He does this quietly, without being prompted. He does this on his own, out of consideration, and without too much thought. When he makes this Ukrainian cucumber salad for himself, G's father always adds in the Greek yogurt; but for myself and his wife, he leaves it out.

And if that's not love, then I don't want to know what is.

This is G's father's signature cucumber salad, though the amounts are never the same because no one measures them - it's more of a template of flavours, really. With its thinly chopped spheres of cucumber and onions slicked in a tangy, creamy dressing of vegan mayonnaise, vinegar, and a generous handful of dill, this salad transmits the fresh taste of cucumbers while also letting the acidity of the onions shine through. The result is a beautiful, versatile salad that I could eat for days during hot summers and freezing winters alike.
No ratings yet
Print Pin
Prep Time: 10 minutes
Total Time: 10 minutes
Servings: 4
Author: Ksenia Prints

« Russian mulled wine (Glintvein), or the perfect drink for the festive season
Almond, cranberry and sweet potato stuffing to liven up the holidays »