This latin flavors twist on a Hanukkah recipe was inspired by my travels to Colombia. Green plantains are a staple of Latin America. Plaintain latkes are common in Jewish kitchens in Colombia and Costa Rica, and plantain fritters are a common recipe across the Carribean coast.

Plantains are a distant relative of the banana. Their flavor varies based on their level of ripeness. For latkes, you need green plantains.

I love plantains because they are naturally gluten free and low in carbs, sugars and other inflammatories. They are great for those on a gluten free, celiac, low FODMAP or AIP diet.

This one unique ingredient has helped inspire a whole new take on my latkes recipes, and I can't wait to share it with you!

Latkes are a traditional Jewish dish served for Hanukkah. They are pan-fried pancakes usually made from grated potatoes, egg and flour, and seasoned with salt and pepper. Latkes can be served as part of a main course or as a snack.

During the holiday season, in Eastern European Jewish households potato latkes are generally served with applesauce or sour cream, although some families also like to top them with jam or sugar.

But in other parts of the world, latkes have very different ingredients toppings - like this latke, which I like to serve with homemade lime cream.

Latkes have been part of Jewish culture for centuries; the first written mention of them dates back to the late 16th century in Germany. Today, they remain an important part of Hanukkah celebrations around the world.

Latkes are a symbol of victory for Jews because the original Chanukah story centers on a miracle where oil burned for eight days instead of one. Eating latkes is viewed as an act of remembrance and celebration during this important holiday season.

Every year, I like to make a different version of the traditional age-old recipe for these fritters. This one took me straight to my husband's Colombian roots!

I based this recipe on Joan Nathan's traditional latke recipe, swapping the potatoes for plantains. Here are the ingredients you need to make this great kosher Jewish Latin fusion recipe:

How to make Jewish plantain pancakes

Grate the 6 plantains and the onion in a food processor, or on the largest holes on a box grater.

Strain the liquid in a large strainer, and pat with paper towels until fully dried.

In a medium bowl, whisk the eggs. Add the grated plantains and onions. Stir with a spoon or spatula spatula until fully combined.

Coat the bottom of a large nonstick pan or cast iron skillet with oil - I like to add about 1 inch of oil. Bring it to medium heat; frying in overly hot oil or cold oil will result in greasy latkes. Scoop out about 1 tablespoon of mixture onto the pan to form each plantain latke. Use a spatula to gently press the latke down on the skillet. Fry latkes in oil on one side until golden brown and starting to crisp around the edges, about 2-3 minutes. Turn over to the other side, and cook for an additional 2 minutes until they are golden brown and crispy on both sides (the longer you cook them, the crispier they get). Transfer onto a paper-towel lined plate to catch excess oil until all plantain latkes have been fried. Sprinkle with salt, if desired (latkes taste great if salty!).

In a small bowl, mix together sour cream and the zest and juice of 1 lime, my favorite Latin flavors! Taste and correct seasongings; you may want to add a bit more or less lime juice than the stated quantity, depending on your palate.

I like to use a cast-iron skillet or a non-stick pan for frying latkes.

To grate the mountains of plantains and onions, I recommend a Food processor, though you can also do this on a box grater.

plantain latkes with avocado crema - blend and avocado and 2 tablespoons of sour cream in a food processor, and serve with these plantain latkes.

plantain latkes with garlic sauce - instead of lime zest and juice, and 1 minced head of garlic to the sour cream.

Serve them with refried beans, pico de gallo and guacamole.

Can you grate plantains?

Yes. I recommend using a food processor to make short work of this recipe, but you can absolutely grate plantains using a manual box grater.

Can you freeze latkes?

Absolutely! I recommend making a double or triple batch of this recipe, and freezing the remaining latkes. All you need to is put them in a 300 F oven for 10 minutes - and they can be reheated from frozen!

Can you make this into vegan latkes?

You can use flax or chia eggs instead of regular eggs to make these plantain latkes vegan.

If you made this recipe, tag me on social media (@immigrantstable), and please leave a comment and a star rating below! 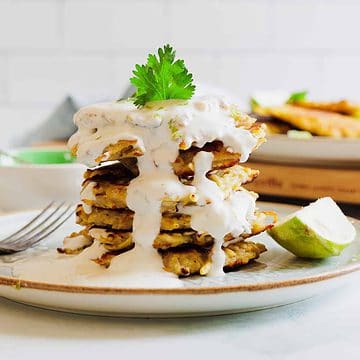