Pair this delectable main course with a light and zesty kale and Cosmic Crisp apple slaw with poppyseed salad dressing.

This post is a partnership with Cosmic Crisp Apples. Thank you for supporting the brands that make this blog possible; I am proud to only work with companies that I truly believe in.

A romantic meal made for the woods

The deep silence of the woods, with nothing but the whispering of the rustling leaves around. The wind, whistling through the openings between the trees, playing its gentle flute-like melody with nothing but nature’s instruments. Your boots, crushing fallen foliage and bits of dried up earth, little stones and pebbles, and the bones of long-ago calcified forest creatures.

This is the music of the forest, the sounds I live for, for which I make my way into the woods every fall.

My love for the forest and for foraging is no secret, but what I haven’t written about before is my love of rustic cabin retreats.

For me, half the reason for living in Canada is the ease of stepping out into the forest and bridging that gap between the wild and the urbane. I love how much space there is to roam here, to discover, to feel like a true pioneer of the true North, strong and free.

But as you can imagine, what I love most about it all is the chance to cook some hearty cabin food!

During my last outing to a cabin in December, I came up with this dish: Pan seared duck breast with berry apple compote and kale apple slaw. It’s a gorgeous pairing of wild, gamey duck, cooked the old-fashioned way, and some sweet homemade apple compote.

A crunchy salad of sweet Cosmic Crisp Apple and kale slaw seals the deal and provides a great contrast to the rich fowl.

They say couples who cook together, stay together and that might be at the core of why a romantic dinner at home is a preferred way to celebrate Valentine’s Day for so many.

But I would also add that the act of cooking for that special someone you love is even better.

While I am a firm believer that you don’t need a special occasion to celebrate love, there is something very fitting about the presentation and ingredients of this dish for Valentine’s Day dinner.

When to serve seared duck breast with berry apple compote?

The colours alone - the deep red and purple apple compote - are a clear association of passion, sensuality and desire. And to get the duck breast just right, you need to cook it slowly and patiently… similar to the process of letting love grow!

If you are thinking that I am getting a bit sentimental, you might be absolutely right.

But I am a recovering Valentine’s Day hater, who has recently discovered the joy of embracing the beauty of this day.

For the best V-Day presentation, the pan seared duck breast can be sliced thinly and arranged on a cutting board in the shape of a heart, with the salad piled to the side and the beautiful red apple sauce drizzled on the top. Making heart shapes with your Cosmic Crisp apple compote is optional but recommended!

The secret to getting just the right balance of sweetness and tartness in this apple compote and kale and apple slaw is using the right apple - and that is the Cosmic Crisp apple.

Any apple that gets my toddler son excited about eating fruit gets 5* stars in my book.

And while being toddler-approved is a definite bonus, Cosmic Crisp apples also have 20 years of research and study by Washington State University to support their claim as the world’s “most perfect” apple.

In my countless cooking and baking experiments with apples as a key ingredient, I have found Cosmic Crisp to be true to the “crisp” part of its name with a balanced sweetness that favours lots of dishes.

These two attributes, together with their naturally attractive red skin, lend a rich and luxurious texture to the compote, and a nice crunch to the salad.

These are the ingredients you will need to make this pan seared duck breast with berry apple compote and kale apple slaw:

How to make berry apple compote?

Start with a large heavy-bottom pot or Dutch oven.

Once the compote comes to a boil, reduce heat to low and cover. Stir often, until the apples have cooked down, for 15 to 20 minutes. Add sugar, lemon or lime juice and spices, cover and simmer for another 5 minutes. Remove berry apple compote from heat and allow it to cool. Blend until desired consistency.

You can keep the berry apple compote in the refrigerator for up to 5 days in a sealed container.

To elevate the taste profile of this berry apple compote, and achieve the preferred blend of sweetness and richness, grab a bag of Cosmic Crisp apples.

The secret to cooking your duck breast on a cast iron is to do it long and slow on one side (about 15 minutes) and then use the flash-frying method on the other side for 1-6 minutes depending on whether you like your meat medium-rare or well done. No need to add any oil.

The result? A beautiful and evenly seared duck breast, that is crispy on the outside and tender on the inside, just as it should be!

Always make sure to cook duck less than what you think it needs. It is also very important to rest your duck meat for about 5-10 minutes before slicing.

Why use a cast-iron pan for making pan-seared duck?

For best results when making your pan seared duck breast, you will need to reach for your cast iron pan.

If you are a cast iron aficionado, you already know what a truly versatile instrument it can be for your kitchen (I love using mine for cast iron pan salmon, and the perfect syrniki).

And if you haven't worked with one before, there is no reason to be intimidated and many reasons to incorporate it into your cooking style.

From one, it is a natural non-stick pan made to withstand scratching and has a much better heat retention capacity.

As a bonus, overheating a cast iron skillet does not come with the same dangers as other pans that can release toxic chemicals into the air. On the contrary, it adds an extra dose of iron to your food.

How to make the kale apple slaw?

Start by removing the ribs of the kale and slice them into thin, narrow ribbons. Dice the apple into cubes or matchsticks (you may want to use a mandolin for this). Transfer to a bowl.

Add finely diced onion and the rest of the dressing ingredients to a jar. Seal tightly and shake until emulsified. Add to bowl with kale and apples, and toss until the kale apple slaw is fully coated.

This pan seared duck breast recipe with berry apple compote and kale apple slaw is a reminder to spoil yourself every once in a while.

With the right timing, it takes only half an hour to put together from start to finish and presents itself very well on a plate, so it is great for fancy and casual dinners.

Here is why you should try this fantastic pan seared duck breast recipe:

Storage and Making in Advance

You can store your pan seared duck breast in the fridge for 2-3 days and reheat when ready to eat, in the stove or oven. The berry apple compote is fine to keep in the refrigerator for 5 days as long as it is in a sealed container.

This pan-fried duck is gluten-free. It can be easily adapted to suit other dietary restrictions:

Substitute duck for a nice, big chunk of pan-fried tofu. Just cook it the same way, but you can also soak your tofu in a rich marinade prior to frying it.

Slices of smoked cheddar or smoked Gouda would also work beautifully in place of the dock.

Omit the sugar from the berry apple compote. Use erythritol, xylitol or monk fruit sweetener instead.

Not a fan of berries? No problem! Simply omit them and make this into a clean apple compote. We love Cosmic Crisp apple compote, but you can also use other apples for this, like Gala or Honeycrisp.

Substitute the kale for arugula leaves, or even sliced buttercup lettuce for a more delicate salad.

What else can you pair with berry apple compote?

You can use the leftover berry apple compote for sweet and savoury dishes. For a delicious, gluten-free and easy dessert, try these Russian pancakes, that will be ready to serve in just under 1 hour.

Can also place it on top of ice cream or yoghurt for a healthy snack that will also satisfy your sweet tooth. Try it with this Colombian ensalada de frutas for a unique fusion dish!

For a savory and easy appetizer, I love pairing this apple compote with baked brie cheese.

For the full Valentine's Day dinner experience, you may want to combine your main meal with some of these wonderful side dishes and desserts. 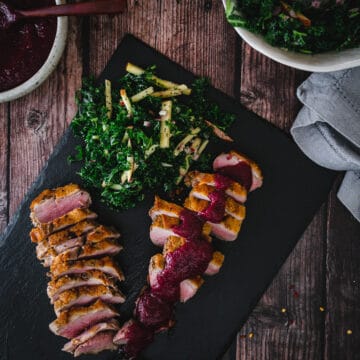